Soil pollution and its impact on our ecosystems and community have been largely overlooked. Soil pollution is the presence of toxic chemicals – such as lead, mercury, copper, and more – in soil. These toxic chemicals in high enough concentration pose a direct threat to not only our health but also the livelihood of our surrounding ecosystems. Soil is a mixture of organic matter, minerals, gases, liquids, and organisms that together support life. All soil contains toxic compounds that are harmful to humans and ecosystems; however, in unpolluted soil, the concentration of such toxic compounds is low enough to pose no threats. When the amounts of soil contaminants exceed natural levels, pollution is generated.

Soil pollution is mainly caused by human activity. The root cause is often related to agriculture (use of pesticides), excessive industrial activity, and poor management of disposal of waste. With our world developing and industrial activity increasing, the way we dispose of our waste results in soil pollution: factories, oil refineries, chemical fertilizers, all lead to pollutants being discharged. These pollutants affect the biological and chemical properties of soil. This means, threatening pollutants are found in soil; this not only disturbs the chemical processes that occur in living organisms but also has serious effects on, us, humans.

With the increasing use of fertilizers, pesticides, and herbicides to increase crop yield, the soil is largely polluted. Excessive use of these pesticides also leads to soil pollution. Another prominent cause of soil pollution is domestic waste. Sewage, if not disposed of correctly, can contaminate soil because of the inorganic compounds found in it. These wastes are extremely hazardous to human health as they may contain carcinogenic substances. Moreover, the hydrocarbons – which are also used in oil refineries – mostly found in petroleum can result in soil pollution if a spillage was to occur. Furthermore, countries are now rapidly increasing nuclear testing and production, and radioactive waste from such activities results in soil being penetrated – hence, soil pollution. The process of metal casting also often results in metallic contaminants (such as arsenic, cadmium, lead, and mercury) entering nearby soils, thus soil pollution.

So, how does this affect us? Soil contaminants can enter the human body in several ways. It could be through direct contact with skin or even inhalation of contaminated soil dust. Exposure could result in nausea, irritation of the skin and eyes, fatigue, and wheezing. However, there could be more serious long-term effects: damage to the nervous system, children are particularly vulnerable to lead, high risk of developing cancer because of the presence of carcinogenic compounds.

Soil pollution also decreases the availability of nutrients present in the soil, thus harming animal and plant life. Moreover, the inorganic compounds that are present in the contaminated soil are toxic to plants; this can also lead to an increase in salinity of the soil,so making plant growth unhabitable. Plants that are grown in polluted soil may lead to herbivores consuming the toxic compounds through a process of bioaccumulation, and this will continually be transferred in the food chain and eventually reach us, humans, creating diseases. The idea of bioaccumulation could also result in the extinction of animal species: the population of land vertebrates fell by 38% between 1970 and 2012.

On a much larger scale, soil pollution could even jeopardize food availability as the poor quality of soil will limit harvesting. About the ongoing crisis of climate change, the first decade of the 21st century saw between 3.6 and 4.4 billion tonnes of CO2 into the atmosphere because of soil degradation. Developing countries may be at more risk as soil pollution particularly affects the quality of their air and water.

There are several measures we can take to prevent soil pollution. On a more technocentric viewpoint, technology can be used to remove unwanted/ toxic compounds from soil; composting involves mixing the excavated polluted soil with a non-hazardous bulking agent to provide optimum levels of air and moisture to microorganisms. From an anthropocentric viewpoint, DDT is still not banned in many regions, so bans should be imposed on chemicals and pesticides. A proper process of radioactive waste should be introduced with an increase in nuclear testing taking place. Lastly, in terms of an ecocentric viewpoint, the idea of reuse, reduce are recycle should be emphasized – industrial waste should be properly disposed of, wastes such as paper and plastic should be recycled and reused. We could stop using toxic chemical fertilizers and try to use Bio-pesticides. Furthermore, we should raise more awareness about this pressing issue through various means. The public should understand the immense threats of this environmental issue and they should be educated about it.

Soil pollution is a critical problem that needs serious and desperate attention. Many scientists have stated that humans are the sole cause of the Earth’s sixth mass extinction which is already underway, and the idea of bioaccumulation of toxic compounds across the food chain also plays a role in this mass extinction event. Humans are also extremely affected by this environmental issue because of the health concerns associated with it. The ecosystem, plant, and animal life are all affected by this largely human-driven issue, and it is not too late to change aspects of our lives to prevent this growing environmental concern. 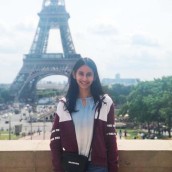 I am a highschool student. Doing my part in the community and making a difference by taking direct action or raising awareness where possible has always been my motto. As an environmental enthusiast, learning about the environment and growing concerns regarding it has always been a passion of mine. This allows me to play my due diligence in society by then raising awareness and informing people. I believe that everyone in our world is shaped by different perspectives and values, which is what makes all of us unique, but coming together with different ideas on how to make our world a better and harmonious place in terms of the environment will help cultivate a stronger community. I hope my passion for the environment and desire to make a difference will allow me to make a difference, regardless of how big or small it is.