Water level rise – this term is not unfamiliar to us. I am sure you have heard it countless times and probably read about it too in periodicals & newsletters in relation to Climate change, Global Warming, etc. Yet, this devastating phenomenon requires a lot more attention and strict remedial action from our side than a mere shrug-off or ‘there’s nothing I can do about it’ attitude.

Don’t you think, that if only this water level rise was with regard to ‘groundwater’ rather than sea/ocean water level, things would have been a lot more pleasant and the situation less grave than the current scenario?

Sadly, the seemingly tad bit of sea-level increase each year (perhaps only a little increase for us, but not for the globe) can do great damage in the coming years if not controlled and rectified in time.

What do you mean by water level rise and what causes it?

Water level rise, commonly called as Sea level rise, is an increase in the level of the world’s oceans due to the effects of global warming. The global sea level has been rising over the past century, and the rate has increased in recent decades. Sea level continues to rise at a rate of about one-eighth of an inch per year.

This phenomenon is caused primarily by two factors related to global warming:

● Thermal expansion caused by warming of the ocean

● Increased melting of land-based ice, such as glaciers and ice sheets

The first one is due to increased atmospheric heat associated with emissions from human activity. As we are aware, burning fossil fuels releases carbon dioxide and other heat-trapping gasses into the atmosphere. The oceans then absorb the majority of this heat. As water becomes warmer, it expands. This results in ocean levels rising worldwide.

The second cause is related to melting glaciers. These reserves of ice are located in places like Greenland and Antarctica. Large ice formations such as mountain glaciers naturally melt a bit each summer. In the winter, snows are generally sufficient to balance out the melting. Recently, though, persistently higher temperatures caused by global warming have led to greater-than-average summer melting as well as diminished snowfall due to later winters and earlier springs. That creates an imbalance between runoff and ocean evaporation, causing sea levels to rise.

What are the effects of water level rise?

● Sea level rise poses a serious threat to coastal life around the world. Consequences include the increased intensity of storm surges, flooding, and damage to coastal areas. In many cases, this is where large population centers are located, in addition to fragile wildlife habitats. Therefore, people may become displaced and will need to seek safer homes.

● In farming regions near the coast, seawater flooding on land contaminates the soils with salt, making them less able to support the growth of crops. The salty water may also get into underground stores of freshwater (known as groundwater), which is the source of important drinking water and also for farmers to grow crops. As sea levels rise, saltwater is also contaminating fresh water aquifers, many of which sustain municipal and agricultural water supplies and natural ecosystems. Even life farther inland is threatened because of this.

● More saltwater hitting our shores changes the chemistry of the soil on the coast, meaning the plant life there will most likely change as well. Plants are really sensitive to their environments. Air temperature, access to water, and the chemical characteristics of soil are all factors that influence whether a plant can thrive in a given location. As rising ocean water seeps into the ground, the soil near the coast becomes saltier. Some plants will simply be unable to cope with the change in soil salinity and may disappear from the shoreline.

● Higher background water levels mean that deadly and destructive storm surges push farther inland than they once did. Higher sea levels are coinciding with more dangerous hurricanes and typhoons that move more slowly and drop more rain, contributing to more powerful storm surges that can strip away everything in their path.

● Sea level rise impedes the quick drainage of rainwater into the sea during times of the high tide.

Thus, flooding, which is the obvious result of rising sea levels, is not the only consequence and there are plenty of other effects to consider — none of them good.

The situation in India:

The Himalayan state of Uttarakhand experienced a deadly flood on February 7, 2021. As per experts, this was caused by a glacier breaking away and falling into the valley, sending a surge of water downstream that engulfed villages and workers at a hydroelectric plant.

Data suggests that, in the coming years, global warming will cause mountain temperatures to rise twice as fast as the global average, whittling away glaciers and threatening communities in the Himalayas, and further afield.

The situation looks grim for India’s financial capital Mumbai as well. A study has revealed that the threat of increasing cyclonic events, storm surges, and sea-level rise could paralyze the financial capital, affecting the lives of more than 20 million people. It further warned that coastal cities with high population density and delicate infrastructure were left with no more than 10 years to act against the impacts of climate change. No wonder, water is the one element that defines — and wrecks — Mumbai.

The affected states have been evolving ways to combat, mitigate and address the problem.

● Addressing the issue of Sea level rise is a priority in the climate action plans of Maharashtra and West Bengal.

● The Water Policy of the Kochi Corporation addresses Sea level rise and even the rehabilitation of the population along the coast.

● A study was carried out in Panaji, Goa (another state deeply affected by changes in the sea) to understand the climate resilience of infrastructure in the event of sea-level rise. It aimed to come out with a vulnerability map, identify areas that might get inundated and those that need intervention.

● As per data published on Jan 19, 2020, the Central government has given the go-ahead to the Maharashtra Maritime Board’s (MMB) Rs 643.5-crore project to create artificial reefs, dunes, and other defenses against the rising sea level across four coastal districts in the state. Soft solutions will be implemented in the form of artificial reefs (using geo-bags or alternative material) 100 to 300 meters offshore to counter the impact of strong tides. Dunes will be set up towards the landward end of 20 beaches, with plantations on them acting as first lines of defense.

How to combat water level rise?

There are three types of solutions to sea-level rise. The most widely-discussed are coping solutions. Coastal cities are installing drainage systems and building up seawalls.

But coping solutions don’t address the root cause of global warming. Hence, many nations are focused on the second type of solution, reducing future greenhouse gas emissions. They are switching from fossil fuels to clean alternatives. These include solar energy, wind energy, and geothermal energy sources. They are instituting carbon taxes to raise the cost of burning carbon. Carbon emissions trading rewards businesses that adhere to carbon caps.

The third solution is the most critical, but less widely discussed. Existing greenhouse gases must be removed from the atmosphere. Carbon sequestration captures and stores CO2 underground. It is the process of capturing waste carbon dioxide, transporting it to a storage site, and depositing it where it will not enter the atmosphere.

One of the easiest solutions is to plant trees and other vegetation to halt deforestation. Next, farmers must manage their soil better. For example, they could reduce plowing which releases carbon into the atmosphere. Instead, they could plant carbon-absorbing plants such as daikon. The roots break up the earth and become fertilizer when they die. The government can subsidize these methods to make them cost-effective with traditional methods that rely on fertilizers.

How can we help?

So far, most of the solutions or remedies that we’ve seen are corrective measures. They are implemented by Governments, local bodies and NGOs post havoc-causing disasters like floods, hurricanes, and inundation of coastal areas.

Soil Pollution: Impact on humans and why we should prevent this?

Strong action on climate change means preparing communities for the impacts that are happening now. But it also means looking to the future, focused on reducing the heat-trapping gases in our atmosphere that will bring damaging consequences as our planet warms.

The good news is that we, as individuals, can play a big part on this front with just a few simple changes. At the individual level, there are some preventive measures that we can take to stop the further worsening of the condition.

● First, plant trees and other vegetation to halt deforestation. You can also donate to charities that plant trees.

● Second, become carbon neutral. Greenhouse gasses are a major contributor to sea-level rise. Learn about how to reduce the number of greenhouse gases you produce each day. ● Third, reduce your energy use. Reducing your energy usage is good for your wallet and the environment. Turn off your lights and appliances when not in use and replace them with more energy-efficient varieties.

● Fourth, reduce food waste. The Drawdown Coalition estimated that 26.2 gigatons of CO2 emissions would be avoided if food waste was reduced by 50%.

● Fifth, cut fossil-fuel use. Where available, use more mass transit, biking, and electric vehicles. Or keep your car but maintain it. Keep the tires inflated, change the air filter, and drive under 60 miles per hour/100 kilometers per hour.

● Sixth, let it soak in. Hard surfaces prevent water from permeating into the ground and lead to an increase in runoff and erosion. Use stepping stones for walkways and paver blocks for patios. ● Seventh, protect wetlands. Wetlands act as natural buffers for coastal areas during rainstorms

and hurricanes. They absorb precipitation and storm surge waters. Learn about wetland restoration activities in your area and get involved.

Knowing what issues sea level rise and flooding may pose today and 10–30 years from now will give coastal communities the ability to prepare for and prevent these problems by finding solutions that protect property, economy, and quality of life. It’s imperative for countries and their residents to remain proactive. Thus, it is entirely up to us now to do our bit – to stop that little bit of seawater from surging up year after year.

⮚ Why Should We Worry About Sea Level Change?

⮚ Why are glaciers and sea ice melting? 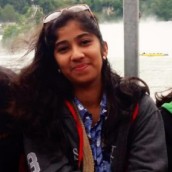 I am a Commerce student and an aspiring Chartered Accountant. It's a great feeling to contribute to the noble cause of conservation of our planet. By coming together, we all can definitely make this world a better place to live in.