Bundelkhand, blighted by 13 episodes of drought in the last two decades, received 52 days of rainfall a year.

But the number of days has more than halved since 2014, leading to repeated and widespread crop failures in a region that is dependent on agriculture, affecting the lives of people bad, around 2 in 5 people in rural Bundelkhand have become urban migrants over the last decade.

Women and children suffer the most because in rural India, collecting water is a woman’s job. It is common to find veiled women, carrying up to four pots – some balanced on their heads – walking miles with their children to fetch water several times a day.

Things have changed since 2016 after around 735 women joined hands as “Jal Sahelis”, or water women friends, silently weaving the water magic to change the scenario.

The women – up to three in each of more than 200 villages – galvanize their communities to harvest rainwater, dig wells, de-silt ponds, build check dams, and repair hand pumps.

Rural Indian women make good managers and protectors of natural resources, because they interact so closely with their natural surroundings and they understand the problems they face in day-to-day life, thus come up with better solutions.

After their daily chores at home, most women carve out only two hours a day for their Saheli work, which involves creating a water conservation plan for their village, participating in local council talks, meeting government officials, and learning how to use tools to fix wells and hand pumps – a chore is traditionally done by men.

And so, living in a male-dominated, conservative region, it wasn’t easy for many women to become Jal Sahelis, but now that there is a noticeable improvement in the water situations, their husbands and in-laws have eased up.

Their efforts have resulted in better irrigation, healthier crop harvests, and increased drinking water, and, most importantly, fewer long walks to fetch water.

And they aim to ensure their children can stay put and their daughters or daughters-in-law can live a life free of water worries.

Sanjay Singh, the secretary of Parmarth Samaj Sevi Sansthan, a grassroots charity behind the Jal Saheli Program, says the women are now more involved in household and village decisions, leading to effective change in some places.

The index of happiness has increased. While the reach of the Jal Sahelis is limited, they hope that the government scales up its efforts for rainwater harvesting across India. 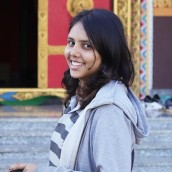 A nature enthuse and a dwelling writer trying to blend in my interests to formulate some good blogs. Happy Reading!