In our taxing and overburdening society, it is not often that one has time to adopt farming and that too at home. Despite that we find people adopting kitchen farming, home farming, relying more and more on organic farming.

People have started taking the baton in their hands and have come up to realise the real nature of chemicals in farming and to revel in the wonders of organic farming to pursue a healthier approach to life.

In our pursuits of searching inspiring organic farmers we came across one seasoned veteran.

Mrs. Lalan Prabhu, a fellow organic farmer, studied botany during her graduation course which helped her start farming after being married at the age of 21.

Having lived in a bungalow; it facilitated a great deal in her backyard farming, where she grew a variety of vegetables and flowers.

Even in the beginning years she never once relied on fertilizers or pesticides placing her trust on the soil and its fertility which have rewarded her well and has been farming ever since.

Being on the forefront of the organic farming movement for 38 years; even before we as a nation actually realized the drawbacks of industrialized farming, she has been relying on nature herself for her fruits.

It has long been said that a soil without worms is dead, it has been proven with how Mrs. Prabhu has relied on vermicomposting for increasing the fertility of her fertile red soil. She further uses neem cake powder, sand and cocopeat to replace the need of fertilizers.

Eliminating the need for chemicals entirely. When we asked her the procedure she uses for soil composting she revealed that kitchen remains and vegetable and fruit peels did wonders for her.

Now coming onto one of the most crucial stages, we asked her about her usage of water in these scorching infernal temperatures, to which she replied that she waters her plants with a pipe in the evening after 5:30 pm every alternate day.

Also due to the lack of any simple method and having her garden on the 4th floor she has to rely on the rains and open wells (in summers) to water them.

Therefore, it becomes really important that she receives a good rainy season to compensate the yearly water supply, as even the open well receives the water from the rainwater harvesting system.

Growing a variety of fruits, vegetables, and flowers, she has come under notice by newspapers and people have appreciated her efforts as well.

Around 20 years back, aspiring to become an inspiration for all, she had even written a series on gardening for a period of 1 year in a local newspaper named ‘Tarun Bharat’.

She has received a lot of support from people around her and being on Facebook has allowed her to connect with people having similar interests making social networking a source of support in gardening for her.

Mrs. Prabhu had been fortunate in the support that she received but it is not always that support comes easy especially in the field of organic farming. Which is why we realise the importance of Mrs. Prabhu’s efforts and understand that she has faced her own hurdles for achieving the garden.

That is why, her efforts give us hope that there will be many more who will sprout a garden of their own and increase the kingdom of organic farms all over the country, contributing to a healthier approach towards our nutrition and our life. 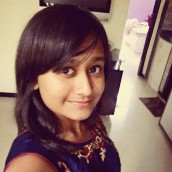 I am Muskan Aggarwal, an English literature aspirant studying at KC college in B.A. department. I have always found literature to be an enriching experience which gives a peace of mind in this mechanical world of ours, opening a new indefinite one with new endless possibilities and potential. I hope to share my passion of literature with others in the near future and hope to spread awareness about our society's falling using literature.