The world has progressed a lot in field of agriculture and the green revolution has brought growth in yield.

The world is practicing agriculture with all kinds of chemical fertilizers and pesticides that are effective in increasing the produce and meeting the food requirement of the world.

But this process is also responsible for bringing in more and more illness which we have never heard of. The usage of chemical fertilizers and pesticides also results in making the land barren. To bring back the glory days of Indian agriculture, Yogesh Vinayak Joshi promotes organic gardening and farming.

Yogesh Joshi, a Electronics Engineer & is in computer hardware profession not only likes organic gardening as a hobby but is keen on recommending it for people. It all started two and half years back when he started a Facebook group for organic gardening and farming posting his practices.

The idea of organic farming started growing on people and soon the group amassed 20,000 people. “All the members of the group are passionate gardeners and each one of them follows the organic method,” says Mr. Joshi.

To maintain the standard of organic gardening, the group is filtered and no chemical-related posts are allowed. The group started by Mr. Joshi had his friends as members in the early-stage but now has members from all around the world who follow his methods.

Yogesh Joshi has a garden of 1000 sq. ft. consisting of various plants both vegetable and fruits grown on the organic principle. For fertilizers he uses Jivamruta, mixture of cowdung, cow urine and jaggary which works wonders in maintaining the soil quality.

He disapproves of all the chemicals sprayed upon the fruits which make them grow in size and make them shine. He also distributes the organic fertilizer for free.

Most of his farming is soil-less but he thinks that a layer of 1-2 inch is essential for holding the plants from falling off along with compost and coco-pit. adults, citronella lemon balm, satapa (for fever), Stevia, Oregano a natural mosquito repellent, fig, drumstick, mango, guava, Chiku, brinjal, tomatoes, chilly in his garden. The garden is also ornamented by bird feeders made from coconut which is his own design.

He has his own organic seed bank which works on a barter system which can store all types of seeds and can be taken out when needed. No need to buy the GM seeds in the market.

He thinks to bring India back on a healthy track we should turn to ancient ways of farming and cooking. In cooking he emphasizes the fact of using earthen pots used in olden days.

He himself uses them in order to cook food which according to him increases the nutritional value of food. Many nutrients are lost and food from pressure cookers contains only 13% of them while cooking it in pots gives 100%.

The garden is watered by drip irrigation which a onetime investment to reduce the wastage of water. The plants are watered for only 15 min in the day and evening and there is no need for it during the rainy days.

Report on the interview with Blue hero: Gunvant Sonawane.

A water harvesting plant is also build up near the garden which saves the water in two big tanks which is further used after rainy season.

Moving from chemical-based farming to organic-based farming a force to reckon with in this world according to Mr. Joshi. “People who are not opting for organic farming are simply uninterested or looking out for monetary gain” informs Mr. Joshi.

He thinks farmers should go for organic farming in order to maintain the health of new generation. He points out that our fore-fathers were healthy than what we are now. To bring about a revolution in organic gardening and farming he believes that schools can be driving force.

His own daughter studied organic farming in school and now is able to handle all the processes from planting a seed to sapling, making, and adding fertilizers. She is also capable to teach others how to make Jivamruta in his absence.

“That is the exact purpose of my work” says Mr. Joshi to inculcate the value of organic gardening and farming in people. Let this small practice grow into a movement bring organic revolution in the country. We are truly blessed to have such personality among us.

The work of Mr. Joshi has been an inspiration for many people and will continue to grow up on people. 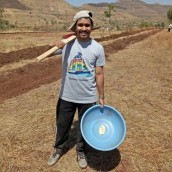 Hey guys my name is Gaurav Bankar and I am a volunteer of tahaan who occasionally likes to write. The main motive behind writing is to spread knowledge and experience. Volunteering is the motto of my life. I live on this quote “No act of kindness no matter how small is ever wasted ”